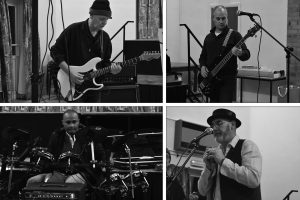 After much discussion we’ve also decided to add in a couple of tracks from the up and coming debut album, due out later this year, to give you a taste of where we are going musically.

Apart from the VIP party gig in April, we have already started taking bookings for gigs later in the year. This includes a charity gig in October raise awareness of homelessness where we will be joined by top European Blues band The Marbletones, together with the highly respected touring artist Tony Close (More information to be announced once contracts have been signed). Tony has played for, and alongside, some of the very best high profile bands in the world over the years, including his own band Close Encounters. We’re looking forward to Tony enthralling us with his set list of the very best of guitar blues. The Marbletones, including top harpist Ben Bouman, have toured right across Europe and the United States, where they regularly play to sell out audiences….We are extremely lucky to have both join us.

As we write this, I can confirm that we there are a further three dates that look like they will be added this month!

Blue 2 the bone is a contemporary blues based rock enthused band offering a mix of old covers and new self written blues tracks.

Set against the backdrop of an American Delta blues culture that emanated out of the Mississippi Delta in the ‘20’s and ‘30’s, Blue 2 the bone has added a new flavor that will appeal to anyone who has a heart for Blues.